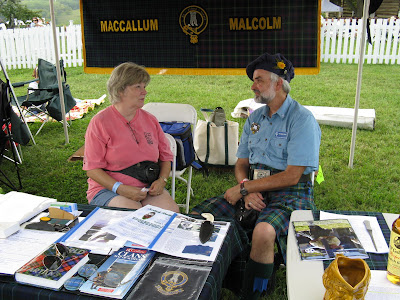 Last Saturday, the Virginia Scottish Games and Festival was held at Sky Meadows State Park in Delapane, Here's the link to my photos of the event. Who should find me there but Chief Melissa Klanecky.

Tomorrow there is the Welsh Festival to be held downtown, Fredericksburg. I hope to get my chores done in the morning and get down there for the afternoon.

In two weeks there is the Williamsburg Scottish Festival to be held north of the town at Rockahock Campground. I'll be there three days hosting the MacCallum Malcolm Clan Tent and camping out. Fun, fun, fun!

It’s Labor Day weekend. Summer is over and the fall season for Scottish Games and Festivals is upon us.

Although, it’s outside the Commonwealth, I’m excited about my trip next weekend to the Long Peaks Scottish Festival at Estes Park, CO. 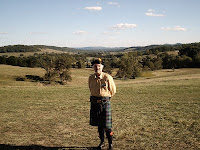 The first up is The 2008 Virginia Scottish Games will be held on September 13-14th from 9 am to 6 pm at Sky Meadows State Park in Delaplane, VA. This will be the second year at Sky Meadows. I really enjoyed the location last year. It reminded me a wee bit of the Highlands. Much better spot than Alexandria. 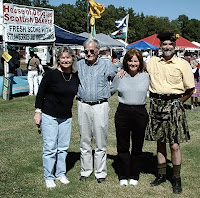 Next up is the Williamsburg Scottish Festival, the first weekend in October. I’m very excited about this one as I will be hosting the MacCallum Malcolm Clan Society Tent. The location is new this year at
Rockahock Campgrounds in Lanexa just north of Williamsburg. 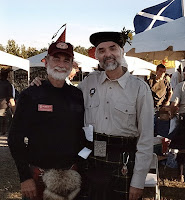 Then comes the Richmond Scottish Games October 25th & 26th. I believe this is the last year at raceway and will be relocated in Carolina County.
The Fredericksburg Scottish Society usually has a dinner
on St. Andrews Day, November 30th.
For me the season ends with the Alexandria Scottish Christmas Walk the first weekend in December. Always a fun time.
Posted by ern malcolm at 5:53 PM 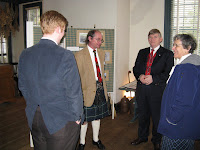 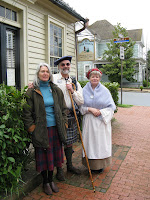 The rains came and the crowds didn’t for the Scottish Society event a Dr. Mercer’s Apothecary. I had a good time and enjoyed seeing the folks of the Society. I’ve posted photos at X Marks the Scot on today’s event and my pre Tartan Day trip to Alexandria, yesterday.
Posted by ern malcolm at 6:26 PM 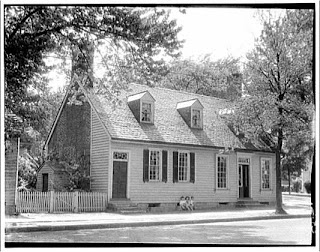 Tartan Day, Sunday, April 6th will be celebrated in Fredericksburg at the Hugh Mercer’s Apothecary Shop. So put on ye kilt and come on down, downtown!

The Blue & Grey Brewery has for the last several years sponsored a St. Patrick’s Day Parade. I’m going to don my new Newsome St. Patrick tartan kilt and get to it this year.

It's one day we are all Irsh! Come and join the festivities!
Posted by ern malcolm at 9:59 PM 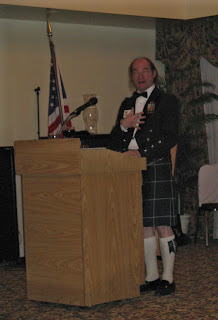 Saturday, January 26th the Scottish Society of Fredericksburg hosted their 14th Annual Burns Night at the Country Club. It was a poignant evening as one who had made it so instrumental in celebrating the Bard of Scotland’s past birthdays was no longer with us – Chief Don Mcleay.

Although Don was not present his presence was. An opening rememberance given by master of ceremonies Preston Simms on Don's contribution to the Society to Trip Wiggins tribute to our past Chief by intertwining The Immortal Memory of Robert Burns with Don’s impressive life. We were touched with the presence of Don’s wife Astrid. 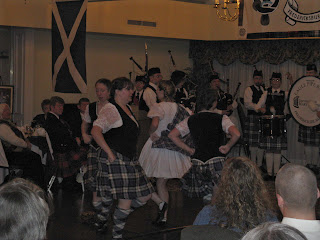 We were entertained royally. With evening’s festivities start a rousing show by the Mary Washington College Eagle Pipe Band lead by Ray Scott. After dinner we enjoyed the Celtic harps of Sara Lindley and Re MacArthur. 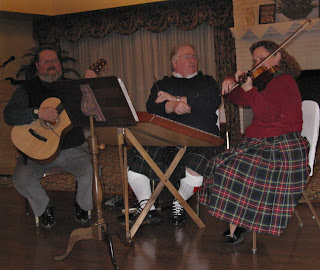 They were followed by Syllabub who delighted us with traditional Celtic music.

The Toasts to the Lads and Lassies was given cleverly by Andy and Kim Fraser. Have I not said the food was excellent? It was! Yet, what impressed me most of all the outstanding moments that evening was the excellent rendition in Burns' own Lowland Scots dialect the ‘Ode to a Haggis’ done by young Preston W. Simms. Well done Preston!

In fact all of them I know made our past Chief proud.
Well done lads and lassies!
Posted by ern malcolm at 8:54 PM 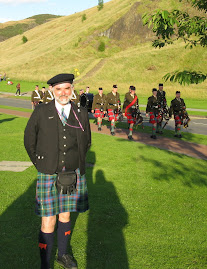